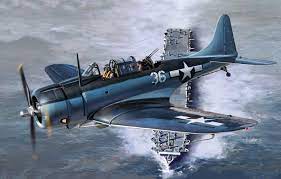 The December 7, 1941, attack by the Japanese on the Hawaiian Islands successfully destroyed or severely damaged eight U.S. Battleships. However, what they failed to do was to catch the U.S. aircraft carriers in the same attack. This mistake would soon begin to haunt the Japanese in a relatively short time.

The prevailing thought prior to World War 2 was that Naval warfare would revolve around the big guns of the Battleships, just as they had in the previous war. In the European theater the British had several carriers available at the outbreak of war. Of the Axis powers, Japan clearly outpaced Germany and Italy in carrier production. The Italian carrier Aquila began construction in 1941. The Aquila was converted to a carrier from the liner SS Roma. When the Italian armistice in 1943 was signed all work was halted. The Aquila was quietly scrapped in 1952. The French had a single carrier at the star of the war, the Bearn. At the onset of the war, she was on a mission to purchase aircraft from the U.S. When the French signed the armistice with Germany, the Bearn was diverted to Martinique in the French West Indies. She would never see combat.

Origins Of The SBD Dauntless

In 1934 the Navy’s aeronautical arm began requesting submissions for a dive-bomber protype in aircraft carrier usage. The leading manufacturers of the day – Brewster, Curtiss, Grumman and others. In the midst of the competition, Curtiss made a significant move in purchasing the Northrop El Segundo, California facility. Not only did they acquire the aircraft production facility, but they also acquired the BT aircraft program which in 1936 launched into the BT-1 and BT-2 dive-bombers. Curtiss then sought to up-grade the BT’s, this would eventually become the Douglas SBD Dauntless. The Dauntless would depart from the bi-plane to single low-wing all metal aircraft. 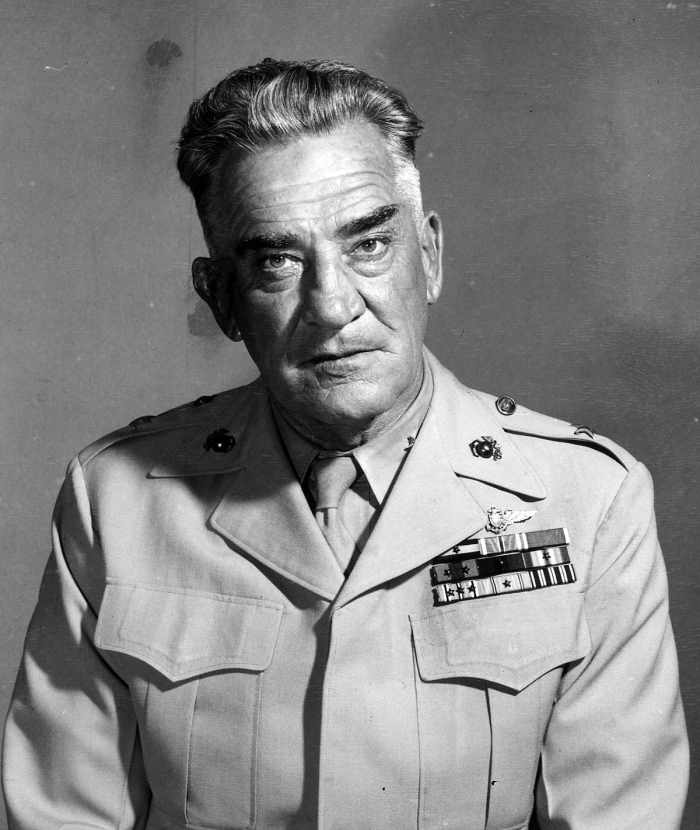 Lead BT and Dauntless designer, Ed Heinemann kept in mind the advice Douglas founder Donald Douglas once gave in early in his career. Douglas told him “If you want to sell planes to the Navy you have to build them rugged. They need to be able to take punishment and still perform.” The resulting Dauntless was comparably smaller than other planes of its capabilities; it had a length of 33 ft and a wingspan of 41 ft. Heinemann departed from the practice of folding wings. He felt that a small well-rounded wing would negate the need for that. By not having the added weight of this mechanism the Dauntless proved to be lighter while still maintaining its ruggedness. Because of its size, carriers were able to house 30 on their decks. Two innovations that Heinemann incorporated were an upgraded hydraulic system to extend and retract the landing gear flaps, replacing a hand-crank system. And perforated wing flaps that were significantly steady the Dauntless, each flap had 3-inch perorations that allowed air to pass through in a dive, which was a key to its success. The initial engine powering the SBD-1 was the 1,000 horsepower Wright R-1820-32 radial engine, the later SBD-6 would utilize the 1350 horsepower engine. The Douglas SBD Dauntless had capable defensive weaponry consisting of 2 M2 .50 caliber Machine Guns firing through the propeller, and the Tail Gunner had a aft-facing swivel mount for 1 M2 .30 caliber Machine Gun. But the real business of the Dauntless was its bombload; it was equipped with underwing ordinance mounting points. The Dauntless could carry two-100-pound bombs on the outer wing pilings. The damage would come from either a Five-hundred or one-thousand bomb housed at the center of the fuselage. A fork-shaped bomb displacing gear, when the bomb was released, the gear would swing downward, preventing the bomb from hitting the propeller. A 3 X sighting scope was added to increase pilot accuracy during dive-bombing. The original engine could motor the Dauntless along at 245 mph, this would be reduced some with heavier bomb loads. In 1940 the Navy and Marines began adding the Dauntless to their squadrons – upgrading them as newer versions became available.

Prior to America’s entry into the war, they surely had the opportunity to see the destructive air power of future advisories Germany and Japan, how each utilized dive-bombing aircraft. In the case of Germany, it was the legendary Junkers JU 87 dive-bomber, better known as the “Stuka” that served as aerial artillery with pin-point dive-bombing at the outset of the war. In the Pacific, the Japanese utilized the Aichi D3A (code name Val) along with the Nakajima B5N2 “Kate” torpedo bombers. The German and Japanese planes were distinguishable by their fixed- undercarriages, and each carried similar bomb loads to that of the dauntless. The December 7, 1941, Pearl Harbor attack would mark the debut of Douglas SBD Dauntless. 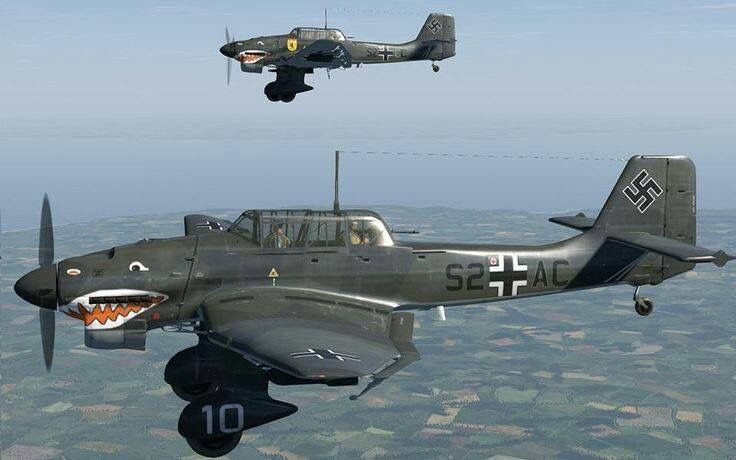 The Dauntless debut in war occurred on the sneak Japanese attack on Pearl Harbor where many of the Marine Air Group 11 SBDs were destroyed on the ground. The day became worse when 18 SBDs launched from the carrier Enterprise flew into a maelstrom. Seven were shot down by the Japanese and friendly fire. The U.S. was fortunate that their carriers were spared the same destruction her Battleships received. The Navy reorganized itself, then set out to seek the Japanese. First order of business was to defend the Hawaiian Islands from future attacks and maintain the lifeline with Australia. In February 1942 the Navy conducted raids on the Marshall and Gilbert Islands. It was during these raids that effectiveness of the Dauntless became apparent. The Douglas SBD Dauntless was the first Navy plane to destroy a Japanese ship when Lt Dickinson of VS-6 sank the Imperial Japanese submarine I-70 off of Hawaii.

One Navy pilot in particular, Norman “Dusty” Kleiss demonstrated he had the “right stuff.” Dusty Kleiss flew several missions in the February 1942 Marshall Islands, Kwajalein Atoll raid. Dusty first showed his skill at dive-bombing when he successfully struck a Japanese Cruiser and several other craft. This foreshadows what would occur several months later in the Battle Of Midway. The Marshall Islands raids revealed a Navy weakness – the Douglas TBD Devastator Torpedo Bomber. The Devastator had mixed results with deficiencies in their torpedoes not exploding on contact with enemy ships. This, and its lack of speed and maneuverability would eventually shorten its career. For this and other actions, Dusty was awarded The Distinguished Flying Cross aboard the Carrier, Enterprise by Admiral Chester Nimitz. This was the same ceret mony where messman Doris Miller was awarded the Navy Cross. The American fight-back continued to pick up steam over the next several months, beginning with the Doolittle raid, and the Battle Of Coral Sea. Dusty’s carrier, Enterprise, was not involved in Coral Sea, her sister ships Yorktown and Lexington having the honor of participating in the first carrier-on-carrier battle where the Douglas SBD Dauntless was involved in sinking the first Japanese carrier. The Battle Of Midway would be the defining point for Dusty and his fellow pilots, thanks, in large part, to Naval Intelligence which had deciphered the Japanese code. During the battle, the tide of the war changed when Dusty and his mates sank four top-line Japanese carriers. In two missions Dusty scored direct hits on the Kaga and Hiryu, in his final mission Dusty was instrumental in sinking the Japanese cruiser Mikuma, when he dropped his bomb down the smokestack. For his actions Dusty was awarded the Navy Cross in November 1942. 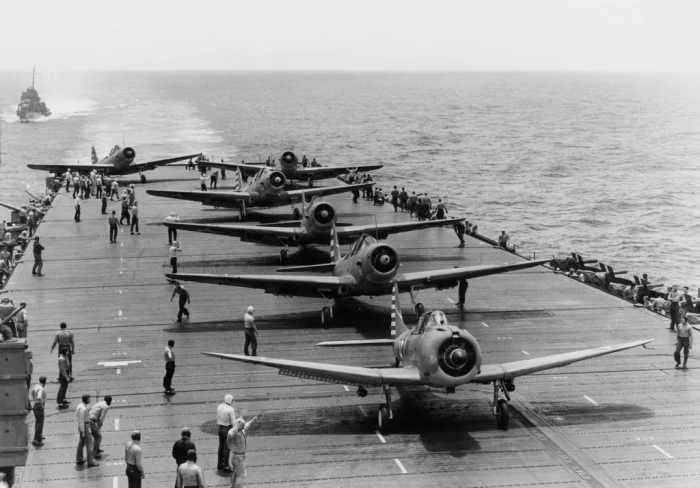 SBDs Aboard The Carrier Enterprise

The Douglas SBD Dauntless was the tip of the spear in the fight for, and in and around Guadalcanal. Now the U.S. was able to really take it to the Japanese with MacArthur’s march up the Solomon’s on his return to the Philippines, and Nimitz’s advances in the Central Pacific where island names like Tarawa, Saipan, Iwo jima and Okinawa would be etched in history. By 1944 the Navy began replacing the Dauntless with the Curtiss SB2C Helldiver. However, many pilots still preferred the reliable Douglas SBD Dauntless, the most effective dive bomber and one of the best aircraft designs of WW2. The Marines continued to use the Dauntless till the end of the war. During its remarkable service the Dauntless sank six Japanese carriers, 14 enemy cruisers, six destroyers, 15 transports or cargo ships and scores of lesser craft and bombed the hell out countless shore batteries and installations.