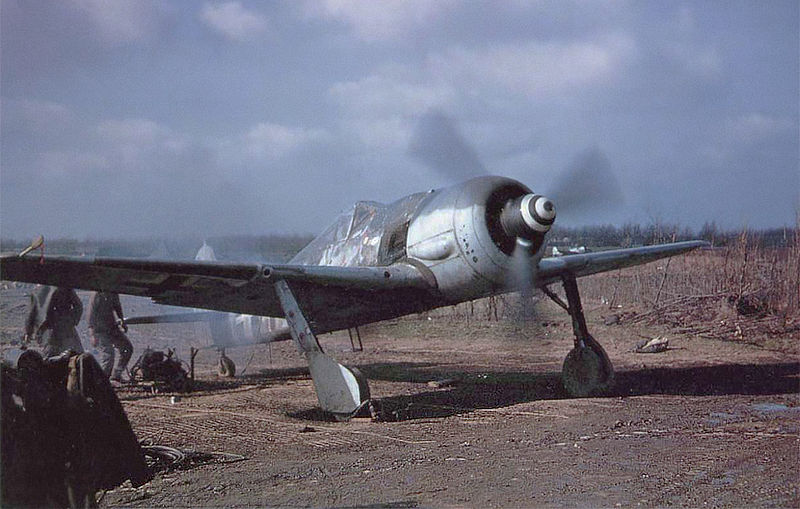 At the outbreak of World War II, the primary German fighter was the excellent Messerschmitt Bf 109. The Bf 109 was a low-wing, single-seat fighter with very good characteristics, and speed. The powerplant of the Bf 109 was the in-line fuel-injected Daimler-Benz DB 601 engine in the 1,000-horsepower range. It had twelve cylinders laid out in two rows. The Bf 109 first saw action in the Spanish Civil War in 1937, its main competition were Russian 1-15 bi-planes, and the short-stubby Polikarpov 1-16. The Bf 109 clearly outperformed the competition.

In the late 1930’s the German Air Ministry sought submissions for a new modern fighter. In the stiff competition, the Messerschmitt team’s Bf 109 beat out the Focke-Wulf 159, Arado Ar 80, and the Heinkel He 112. However, the German Air Ministry had the foresight to think of an insurance policy, so to speak, for a backup fighter. The Daimler-Benz DB 601 engine was in full production, so a competing fighter would need to utilize a different power plant. Focke-Wulf designer Kurt Tank had submitted a fighter airplane submission to compete against the Messerschmitt Bf 109 concept. After losing the contract, Tank turned his attention to other aircraft design for Focke-Wulf. 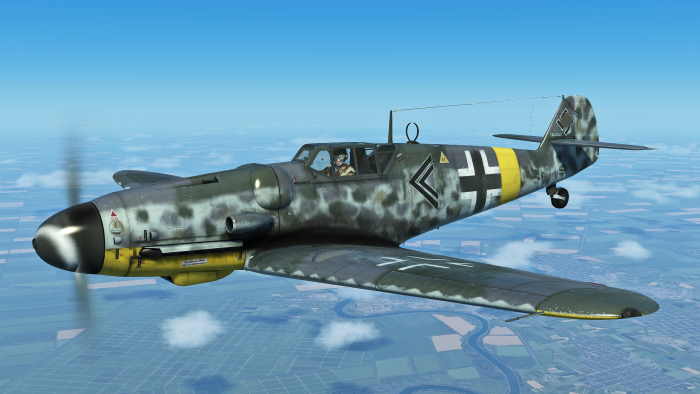 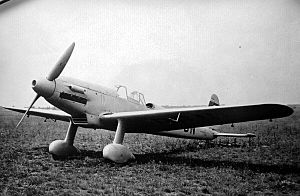 Kurt Tank’s first highly successful aircraft was the Fw 200 Condor, a four-engine aircraft that served in a civilian and military capacity. The Condor made a Berlin to New York flight in 1938 and was instrumental in maritime patrolling in the Battle Of The Atlantic during the war. What made Tank’s next submission more appealing was his aircraft that utilized an air-cooled radial engine. Prior to the war, Germany had purchased several U.S.-made Pratt & Whitney radial engines, and German company BMW would later build them under a license agreement. For the Americans, the radial engine was popular with Army bombers, and the Navy deemed them more reliable, they didn’t require a radiator for cooling, and the shorter engine was useful in aircraft storage at sea. 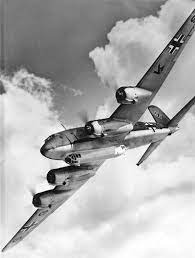 In its current phase, the radial was deemed slower than the inline engine due to a larger cowling needed for the circular radial engine. German engineers solved this problem with the invention of a stream-lined cowling for the Focke-Wulf 190. They hit upon the idea of smaller air inlets for air intake. Instead, they added a small fan behind the propeller to increase airflow. The first Focke-Wulf 190 prototype (B1) was ready for testing on June 1, 1939. At the controls was test pilot Hans Sanders. He nudged the 190 down the Breman runaway, and it took flight. Sanders relayed the maneuvering characteristics were excellent; the engine power was muscular in comparison to the added weight. Sanders approved the extra wide undercarriage for greater safety in takeoffs and landings. However, there was one fault with the engine cooling; the added fan was not efficient enough. Sanders said, “I felt like my feet were in a fireplace. 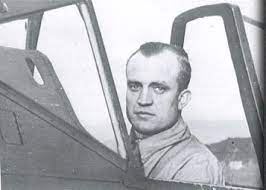 Overall, Kurt and his team were extremely pleased with the 190. Now, a more powerful radial engine was now available, the BMW 801 radial. The 801 radial was heavier than the original engine; to compensate for the additional weight in regard to the plane’s center of gravity, the cockpit was moved back. The cowling would also be replaced with a conventional cowling. This move also solved the heat the pilot had experienced. The Focke-Wulf 190 had a high canopy which gave pilots much better visibility than the 109’s. With each new modification, an outstanding fighter began to take shape. The Luftwaffe gave their approval and put the 190 into production.

After the surrender of France in 1940, the German Luftwaffe engaged the United Kingdom in an epic air battle. The heavyweight fighter aircraft at that time were the German Messerschmitt Bf 109, the Hawker Hurricane, and British Marine Spitfire. Before the Germans could invade the UK, it was imperative that they sweep the skies of the RAF. The RAF strategy was to, whenever possible, use the Hurricane to decimate German bomber formations while the Spitfires engaged the 109E’s escort. In the comparison between the two, each had an advantage. The Focke-Wulf 109 was capable of out-diving the Spitfire. If the Spitfire attempted this, it would sometimes stall out because of Merlin’s carburetor. The Spitfire’s advantages were its tighter turning circle and faster turn rate, which allowed it to outmaneuver the Bf 109 in the horizontal plane. By the end of 1940, it was apparent that the British were beginning to get the upper hand. 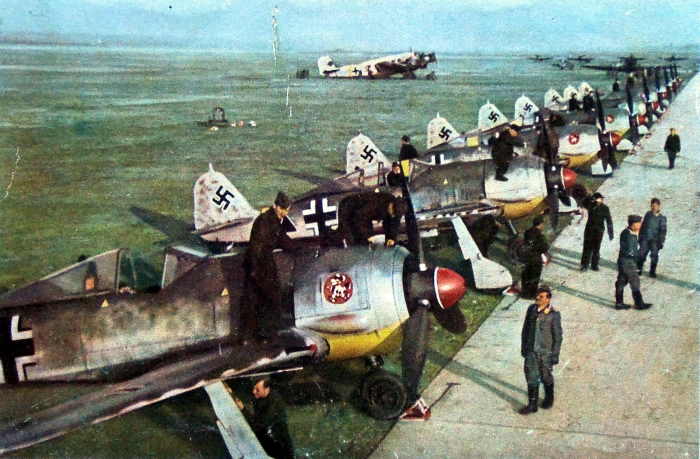 As expected, the Germans found a way to address their deficiency with the introduction of their new fighter, the FW 190. Jagdgeschwader 26, under the leadership of legendary pilot Adolph Galland was the first to receive the new fighter. In September 1941, the British began to encounter the Fw 190’s. The prowess of the 190 was shown when 190s engaged the Spitfire Mark V. In the running battle, 15 Spitfires were shot down, with a loss of no 190s. This was alarming to the British. It is quite clear that the Germans had regained the advantage with the 190. As the British would soon find out the hard way, the Focke- Wulf 190s were superior in firepower, armed with 4 cannons and 2 heavy 7.9 machine guns. The 190 had an excellent climb and dive rate, an excellent roll rate, and could fly 25 to 350 mph faster than the Spitfire plane. The British would not discover the full extent of the 190’s full capabilities until a sheer stroke of good luck when pilot Armin Faber became disoriented on a mission and landed on RAF Pembrey (very similar to what happened to the Japanese with the Akutan Zero).

However, at this time, the Luftwaffe faced a slight dilemma. Many of their fighter pilots still preferred the improved F and G models of the 109s. While this internal debate raged, the German war plans changed with two major events: the invasion of Russia, which shifted resources to this ill-fated venture, and the Japanese attack on the Americans at Pearl Harbor, which eventually drew in the American Army Air Corp.

The Fw 190 And The Eastern Front

Despite the Non-Aggression Pact Germany signed with Russia in 1939, the Germans double-crossed the Russians and invaded them on June 22, 1941. The Allies had forewarned the Russians of Germany’s intentions; however, Russian leader Joseph Stalin dismissed the warnings. Initially, German land and air forces steamed-rolled through western Russia with very little resistance. Nearly reaching the outskirts of the Russian capital, Moscow. The German Luftwaffe took total control of the Russian skies immediately. At that time, much of the Russian air force was antiquated, and a great deal of their aircraft was destroyed on the ground. Russian pilot training was far behind that of Germany. The Russians didn’t have anything in their inventory to match the Me 109, let alone the Focke Wulf 190.

With the early setbacks in 1941, the Russians began to stiffen and recover by mid-1942. With the aid of winter, and a change in military leadership, the Russians accomplished the incredible feat of moving much of their production capabilities east, beyond the Ural Mountains, out of reach of the Luftwaffe. The Focke Wulf 190 A-1s didn’t begin to arrive in earnest on the Eastern Front until late 1942. Jagdgeschwader 51 was the Luftwaffe Group to receive 190 A-1’s, 190 -2’s and 190 A-3’s. The Group first saw successful action in November 1942 around Stalingrad. Jagdgeschwader 54 would follow in 1943, and Jagdgeschwader 26, which deployed from the fight in France. The titanic fight in the Battle Of Kursk was a high water mark for the 190 on the Eastern Front, a time when the Luftwaffe aces racked up incredible numbers against Russian aircraft. However, as the Germans would find, the Russian aid from the allies and their own production prowess could easily replace their losses faster than the Germans could. In 1944 it was clear that the Germans were losing the fight in Russia, from this time until the end, the Germans would be on the defensive.

The Fw 190 On The Western Front

With their defeat In North Africa, Sicily, and the surrender of Italy, a German defeat was almost certain after the Allies landed in Normandy. Throughout 1943, the Luuftwaffe had managed to hold its own against the Allies' daytime bombing campaigns. The Allies now had some excellent fighters; P-47 Thunderbolt, P-38 Lightning along with the Spitfire. However, they lack the range to escort the bombers to German targets and back. The Fw 190’s took a great toll on bombers, to the point the Americans were forced to consider a pause in the bombing campaign. Luftwaffe Ace Adolph Galland attempted to convince the authorities to focus their stressed resources on the manufacture of the Fw 190 and the new German jets. The 190’s were also pressed into another duty. For some time, the Luftwaffe searched for a replacement for its aging dive-bomber, the JU-87 Stuka, whose time had come and gone. With its speed and added fire power the 190 performed well in this new role. 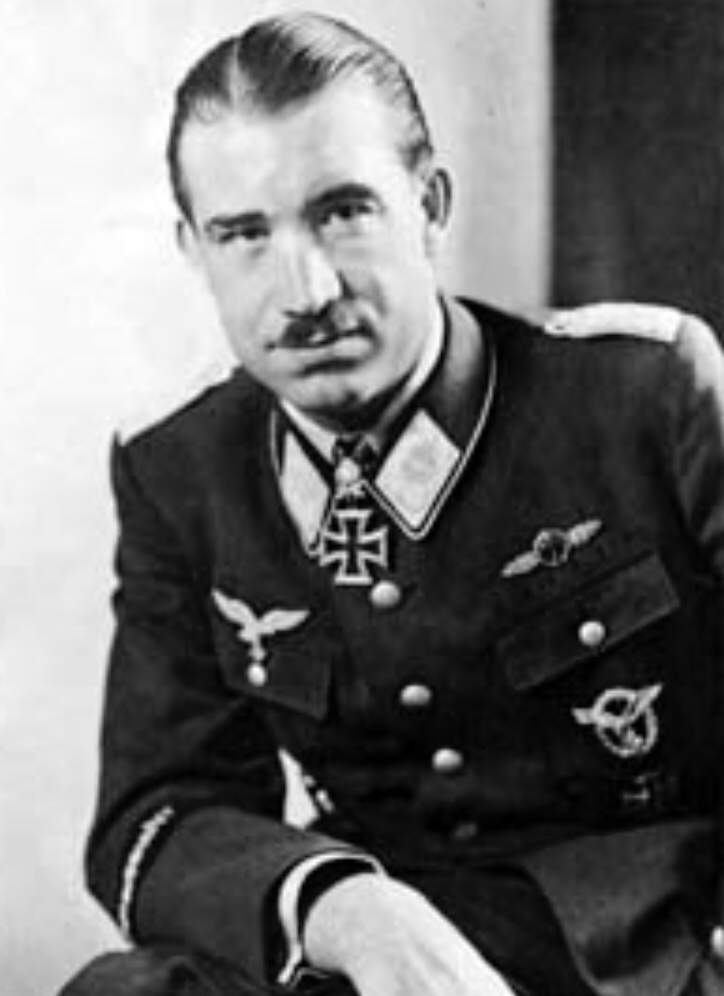 The advantage the Fw 190’s had in 1943 evaporated in 1944 with the introduction of the war-winning North American P-51 Mustang. This super fighter with the range to escort bombers to the target and back sealed Germany's fate. As their numbers grew in the sky, they were able to range ahead of the bombers and confront the 190s, and if the 190’s didn’t come up to fight, the Mustangs would swoop in, attack airfields, and destroy them on the ground. In an attempt to regain their advantage, Kurt Tank designed the last version of the Fw 190, the TA 152. The first Ta 152’s became available in January. They were an improvement on the Fw 190 D. The 190 was less effective at the height Allied bombers and their escorts were flying. The 190’s struggled at heights above 25,000 feet. The TA 152 could reach an astounding height of 47,000 feet, with additional firepower and a pressurized cockpit. It would be Germany’s fate that the TA 152 would come too late to save Germany from its destruction and defeat.