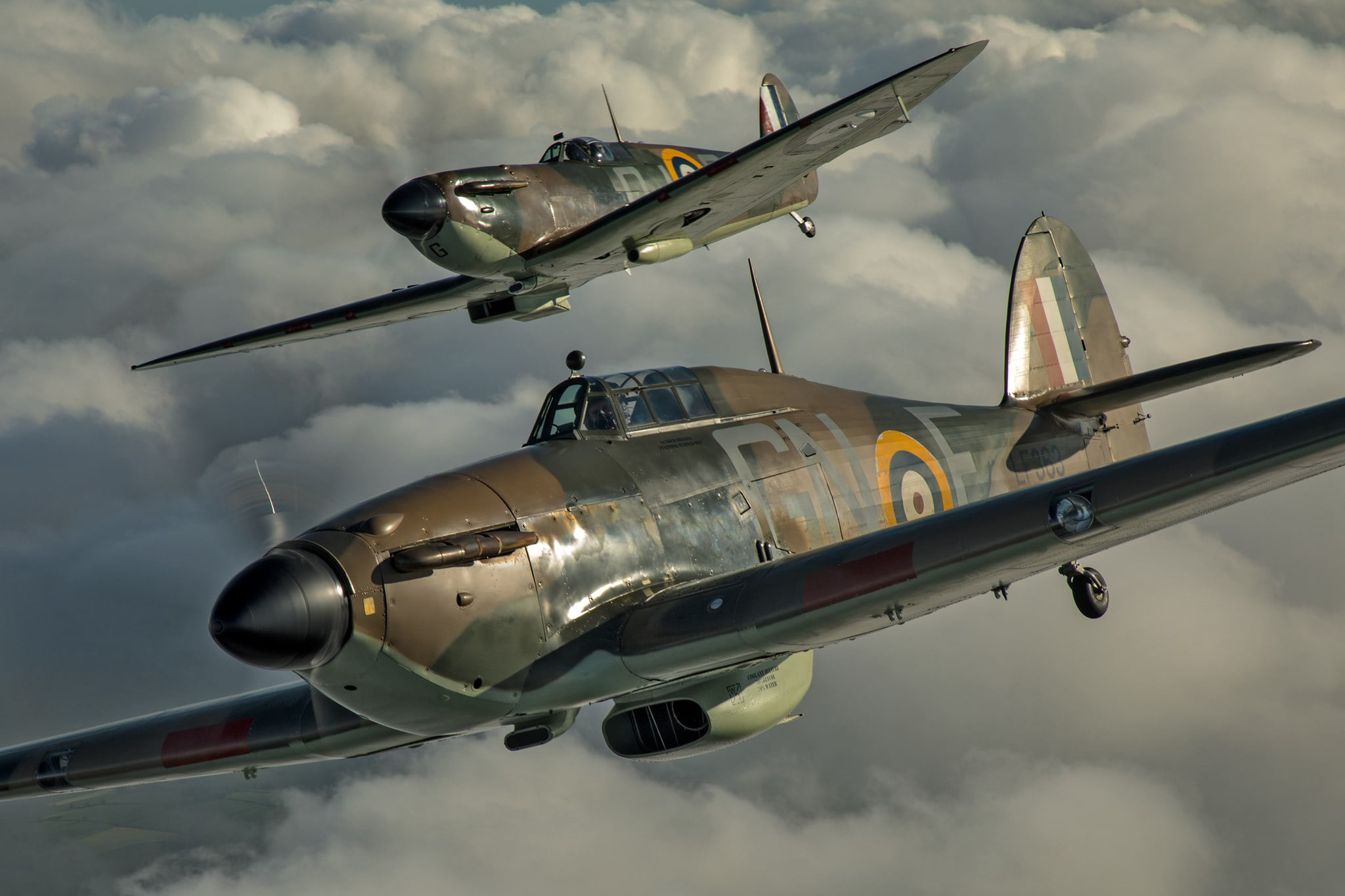 During World War II all the major combatants produced fighter aircraft that became legends of the war. Gone were fabric covered bi-planes of the last war, replaced by all-metal single-winged, fast fighters. The British produced some of the best, with one in particular, considered to be the best.

The Gloster Gladiator would have the distinction of ushering the RAF out of the bi-plane era in the era of modern fighter aircraft. An early 1930’s production, the Gladiator had an all-metal frame covered in fabric, powered by a Bristol Mercury IX air-cooled radial piston engine, that turned a two-blade fixed pitch wooden propeller. A departure from the World War I era, the Gladiator had an enclosed cockpit that provided great visibility. The Gladiator was armed with two 7.7 mm Vickers Mark V machine guns under the fuselage, and two Lewis machine guns under the lower wing. 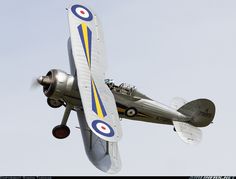 In 1938 the Mark II version of the Gladiator was also destined for sea duty carrier service. The 801 squadron was the Air Fleet’s first operational Sea Gladiator unit aboard the carrier HMS Courageous in 1939 just prior to the outbreak of World War II. The Gladiator could reach a speed of 256 mph, and a ceiling of 30,000 feet. The Gladiators cut their teeth in war during the Sino-Japanese war in 1938 with the Chinese Nationalist Air Force. They had some success, but when the Japanese introduced the A6M Zero, the Gladiator was out classed. The same would occur in the European theater later.

In the late 1930’s, the British determined that machine guns didn’t have the destruction power needed in modern fighter aircraft. The new weapon of choice was the French 20 mm Hispano-Suiza HS.404, which could fire high explosive rounds sure to cause great damage to an adversary. The goal was to design an aircraft that could carry four of these deadly armaments. At the time of its introduction the Whirlwind was a contemporary of the Hurricane and Spitfire. 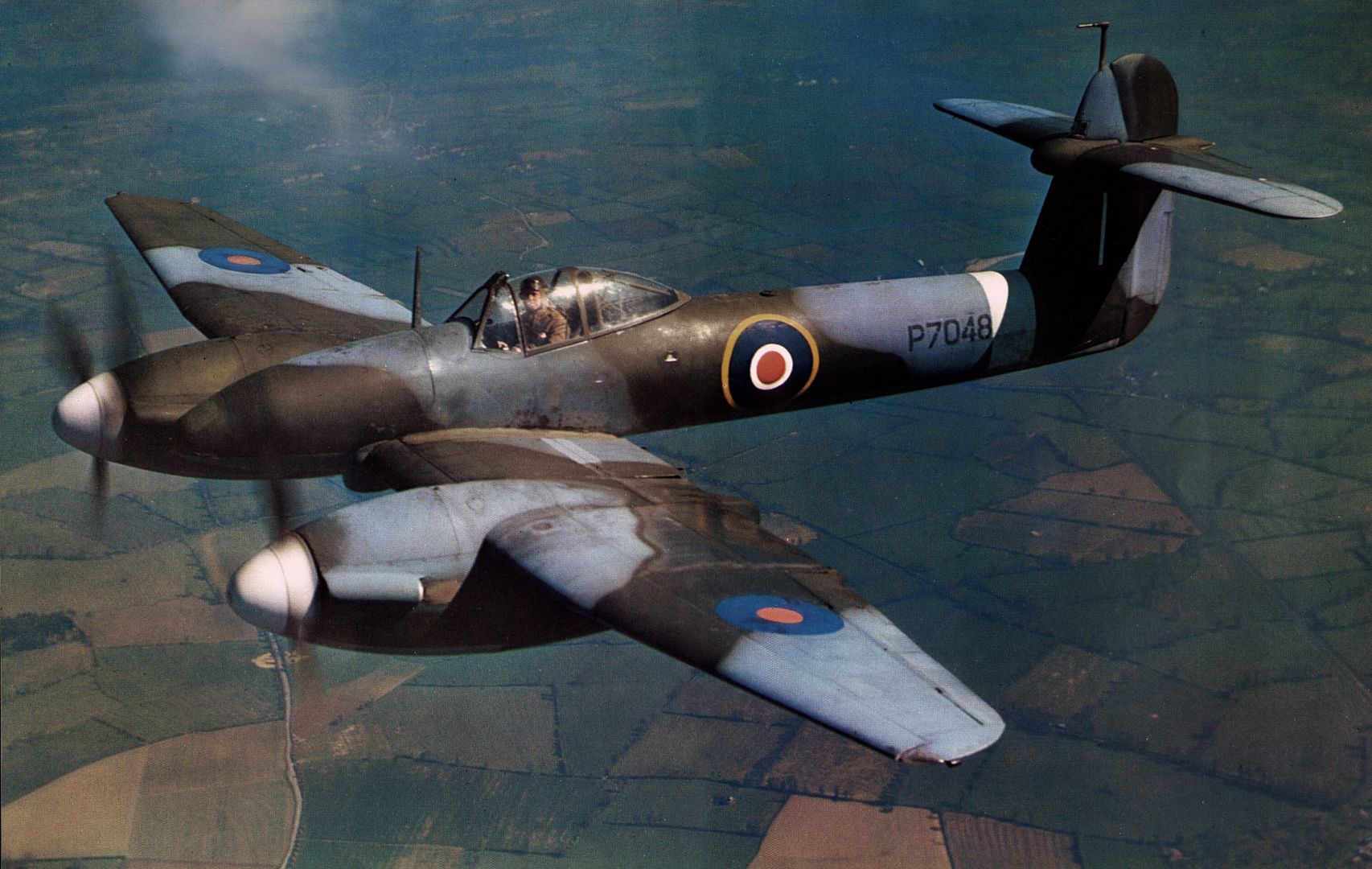 Designed by Westland engineer William Edward Willoughby "Teddy" Petter, the Whirlwind emerged as a single-seat, single-wing, twin engine fighter with its cannon mounted in the nose. Like aircraft of its type, it suffered under-power engine and never lived up to its potential as a true fighter. What it did well was a ground attack role. It served until 1943 until other aircraft arrived on the scene.

The Beaufighter, produced by the Bristol Airplane Company, led by the aircraft design team of Leslie George Frise, was a twin-engine, single-wing fighter with a crew of two. It had many of the characteristics of the Bristol Beaufort torpedo bomber, and adequate firepower and long range. During its production several variants were produced powered by the Bristol Hercules engine. Bristol did experiment with the Merlin 20 engine which they found to be unsatisfactory. 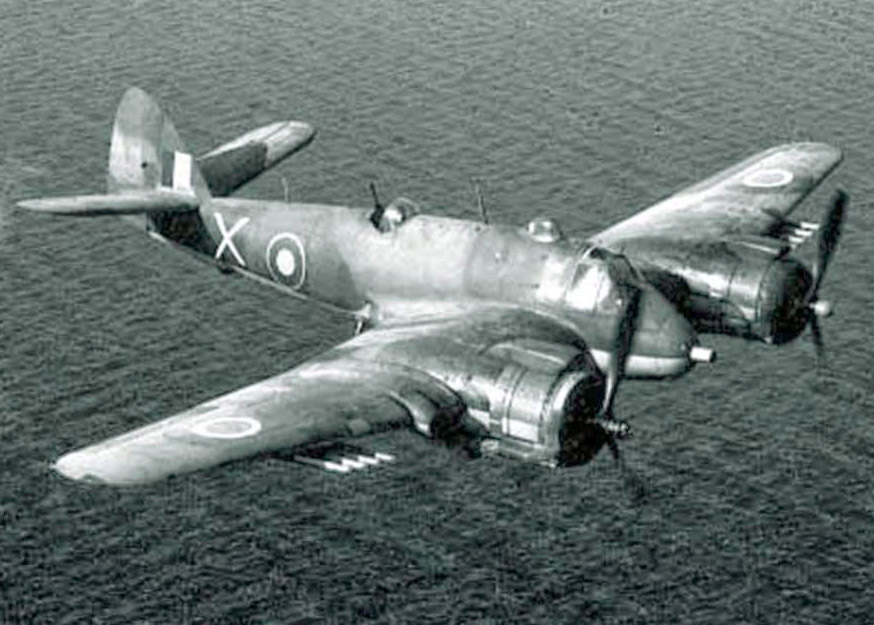 The Beaufighter would serve in every theater of the war. The armament of the first Beaufighter consisted of four 20 mm cannons in the center of the plane. Later version would add six machine guns in the wings, and in one version a turret behind the pilot with four machine guns was added. The Beaufighter was even deadlier when wing mounted bombs and rockets were added. The Beaufighters forte was as a night fighter when equipped with radar. Not designed to tangle with Axis WWII fighters, however, it was a different story when attacking bombers, shipping, and ground strafing. The Beaufighter had a unique engine nacelles sleeve that muffled the sound of the engines. In many cases, opposing teams could not hear the Beaufighter approaching until they were on top of them. The Japanese gave them the name “whispering death”.

The Fairey Firefly was designed as a single-seat, single-wing Air Fleet Arm carrier reconnaissance fighter first introduced in December 1941. Built by the firm Fairey Aviation, and the chief engineer H.E. Chaplin. The Firefly had a crew of two and was armed with two 20 mm cannons in each wing. As a carrier plane, the Firefly had folding wings that folded to the side for carrier storage. The Merlin “Griffon IIB” engine was chosen as the powerplant for the Firefly generating a maximum of 1,735 hp. Each crewman had separate jettison canopies. Later versions would be equipped with wing mounted rockets, giving it devastating firepower. 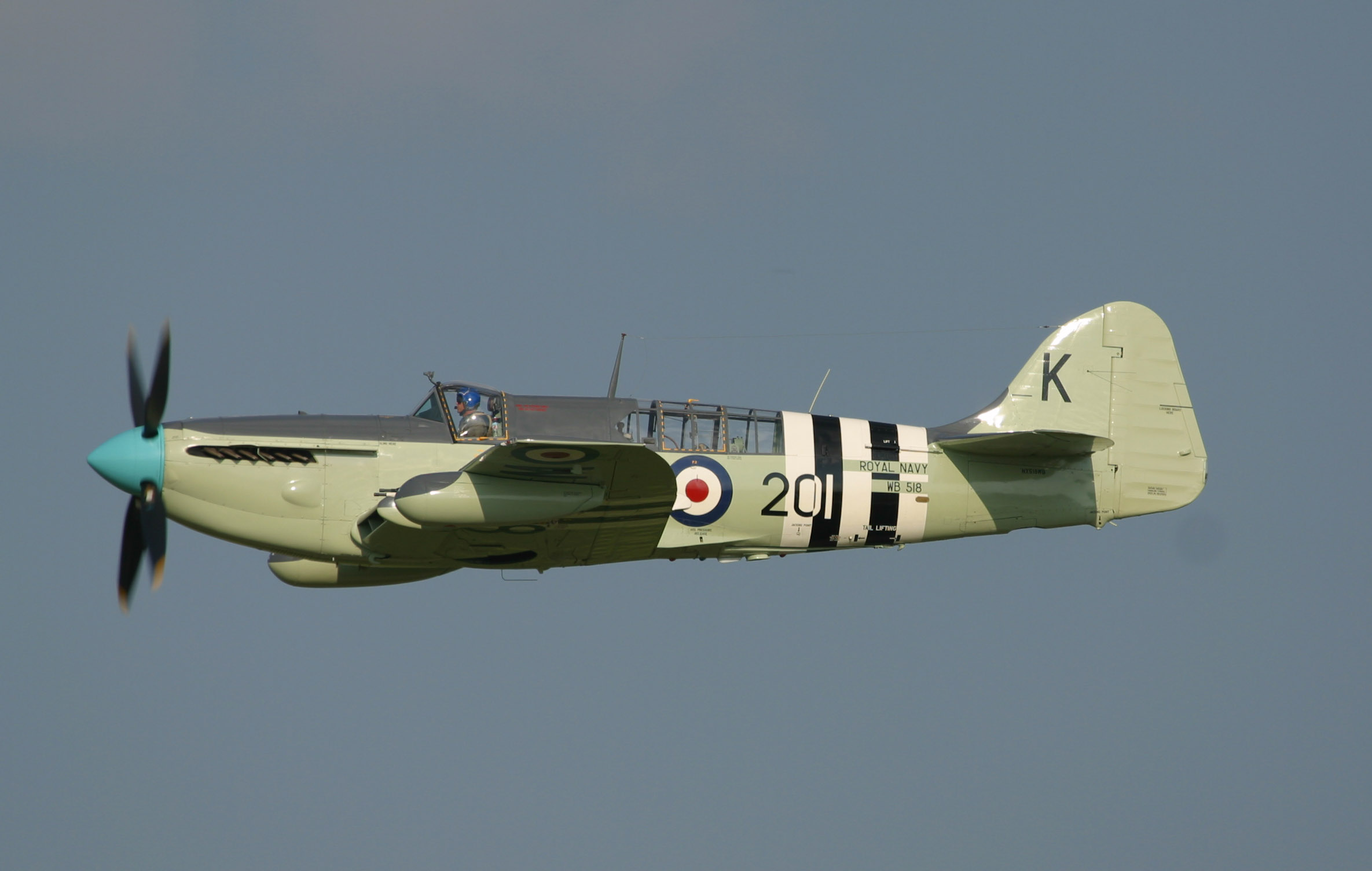 During a tour of the carrier Implacable, King George VI and Queen Elizabeth and their daughters Princess Elizabeth and Princess Margaret were treated to an aerial display of the Firefly. The MK model that first saw action in 1944. The Firefly was 37.7 feet in length, 44.5 wingspan, 13.6 feet in height. The Griffon engine powered the Firefly to 315 mph, a distance of 1300 miles, and a ceiling of 28000 feet. The Firefly was not designed to tangle with top line fighters, but was then adequate for coastal patrol, attacking shipping, and ground attack.

At the outbreak of World War II the casualty rate for bomber command was high. Sir Geoffrey De Havilland had a thought that the best way to save lives would be to have a bomber whose defense would be its speed in avoiding Luftwaffe fighters. De Havilland first proposed an unarmed version, but his submission was that he proposed an all-wood plane at a time when the industry was fast moving to all metal. De Havilland Mosquito had the foresight to see that wood had its advantages – metal had its shortages, wood was plentiful, and the British had a skilled carpentry workforce. 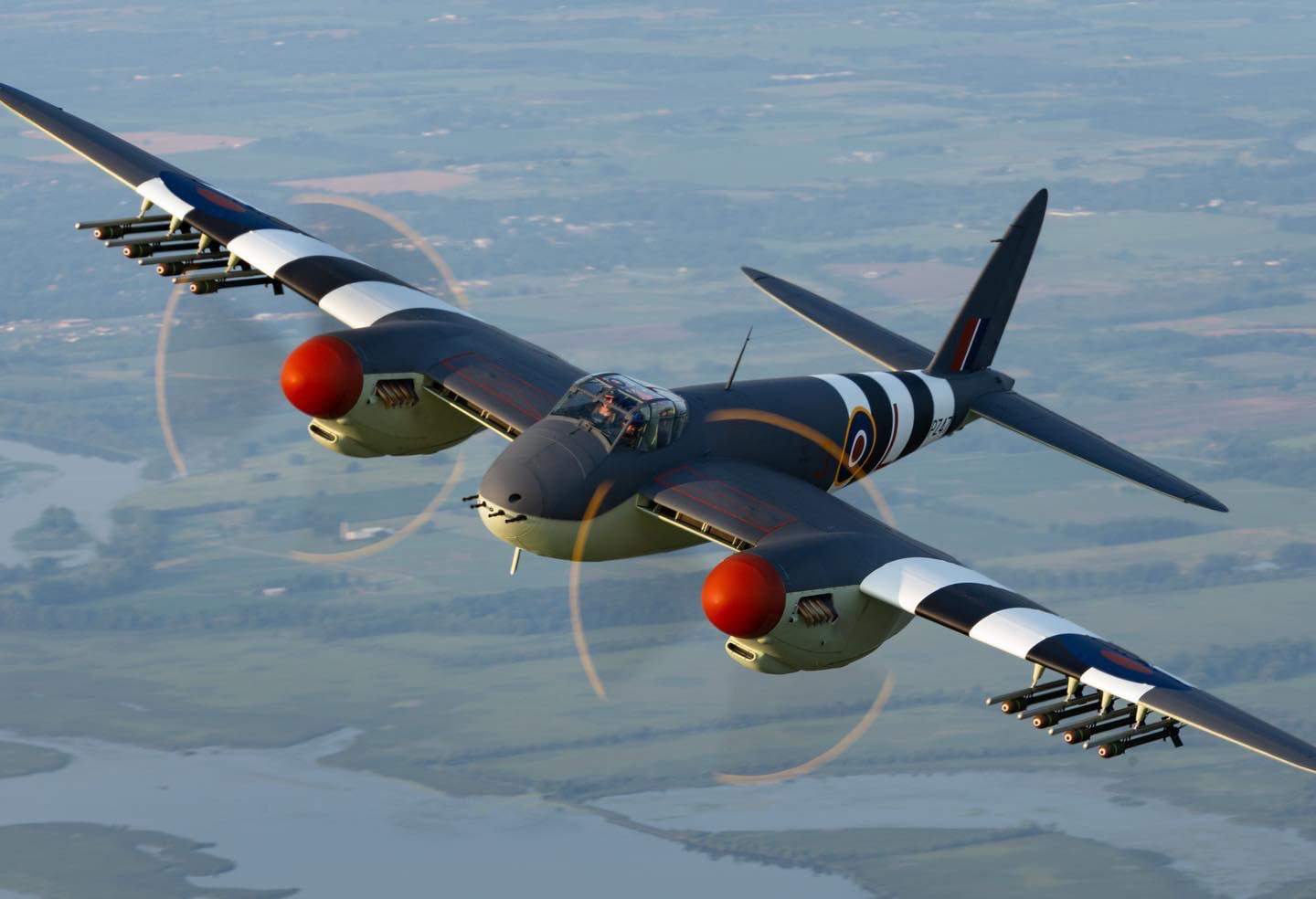 Despite his past success, the Air Ministry turned down his proposal. Undeterred, De Havilland went ahead with construction, believing in his idea. The magic of the Mosquito was the installation of two powerful Merlin engines that produced over 3,000 horsepower, along with large propellers. Thousands of men and women labored tirelessly to produce the Mosquito, at the height of production four complete Mosquitos were produced per day. With a pilot, navigator, and 4,000 lbs. bomb load, and obtain a speed of over 400 mph. Now the Air Ministry was thrilled. But the best was to come when the previously unarmed Mosquito was now armed to the teeth with cannons and rockets. The Mosquitos war record is unmatched by any aircraft.

The legendary Hawker Hurricane is the byproduct of the Hawker Fury. The Fury was Hawker’s first attempt at building a single-wing fighter, breaking from the past bi-plane era. The yet unnamed Hurricane took to the skies in November 1935. The Hawker name would not be approved until mid-1936. Hawker engineer Sydney Camm’s creation was the first British fighter plane to reach over 300 mph. The number 111 squadron was the first to receive the Hurricane in late 1937. After some initial jitters, the Air Ministry boosted aircraft design">aircraft production in preparation for war. 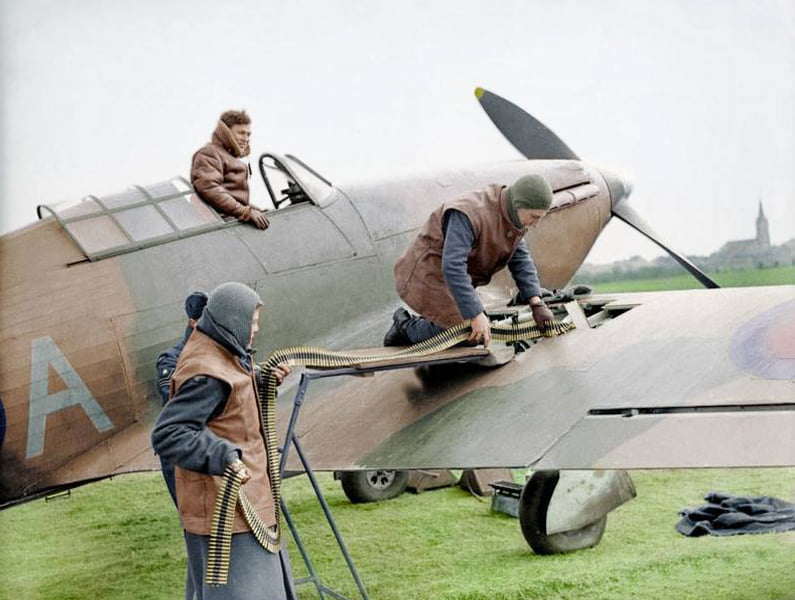 At the outbreak of war the RAF had 500 Hurricane’s available. The Hurricane’s bore the brunt of the RAF’s fight in the Battle of France. The RAF wisely chose to keep the Super Marine Spitfire in reserve in the defense of the home island. Once Germany defeated the French, their next goal was to cross the channel and attack England. In order to accomplish this the Luftwaffe needed to win the air battle. The Luftwaffe first attacked shipping in the channel, anticipating the RAF would try to defend their shipping. The coming fight would be the RAF finest hour in the annals of British history. While the Spitfires tangled with the 109’s and 190’s, while the Hurricanes attacked the true dangers, the bombers.

The Hawker Aircraft Company, set out to improve on the steady, and reliable Hurricane. The idea was to produce a new model that would be comparable to Supermarine Spitfire as a fast, high-level interceptor. The Hawker Typhoon was designed to do this job. The Typhoon was the first British fighter to hit the 400 mph at level flight. Unfortunately, the Typhoon was beset by several major problems. It never met the high-altitude goals but was capable at low-level and did its best work as a ground support fighter-bomber. 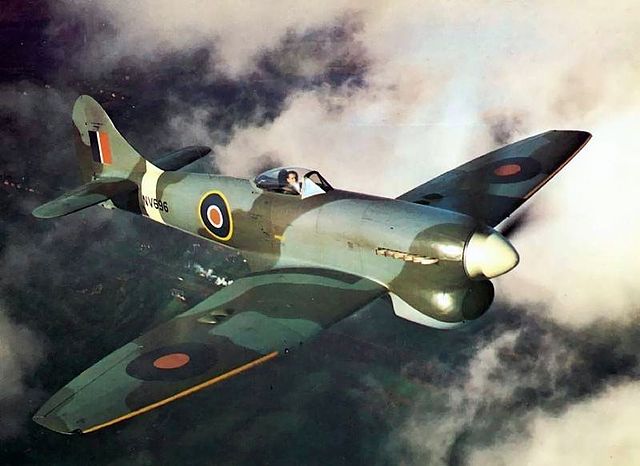 A number of changes to the Typhoon soon ensued, so much so, the new aircraft was named the Tempest. The Tempest would hit its stride in 1944. It maintained the ground attack role of the Typhoon and attained its high-altitude mission. The Allies were blessed with several high-level interceptors – P-51 Mustang and others. The Tempest drew the assignment of intercepting the deadly German V-1 rockets that were terrorizing Southern England. In a stretch between June thru September 1944, Tempest’s squadron downed over 600 V-1’s.

If there ever was a knight in shining armor it would have to be the Supermarine Spitfire. Sir Reginald J. Mitchell's creation is, arguably, the finest British fighter plane of the World War era. The Spitfire lineage dates back to winning Schneider racing trophies in speed racing. The large elliptical wings on the Spitfire make it instantly recognizable. The beating heart in this lion of the sky was the Merlin engine. After a rejection of his first submission, Mitchell fell back on his own instincts of what he thought the future of fighter aircraft would be. 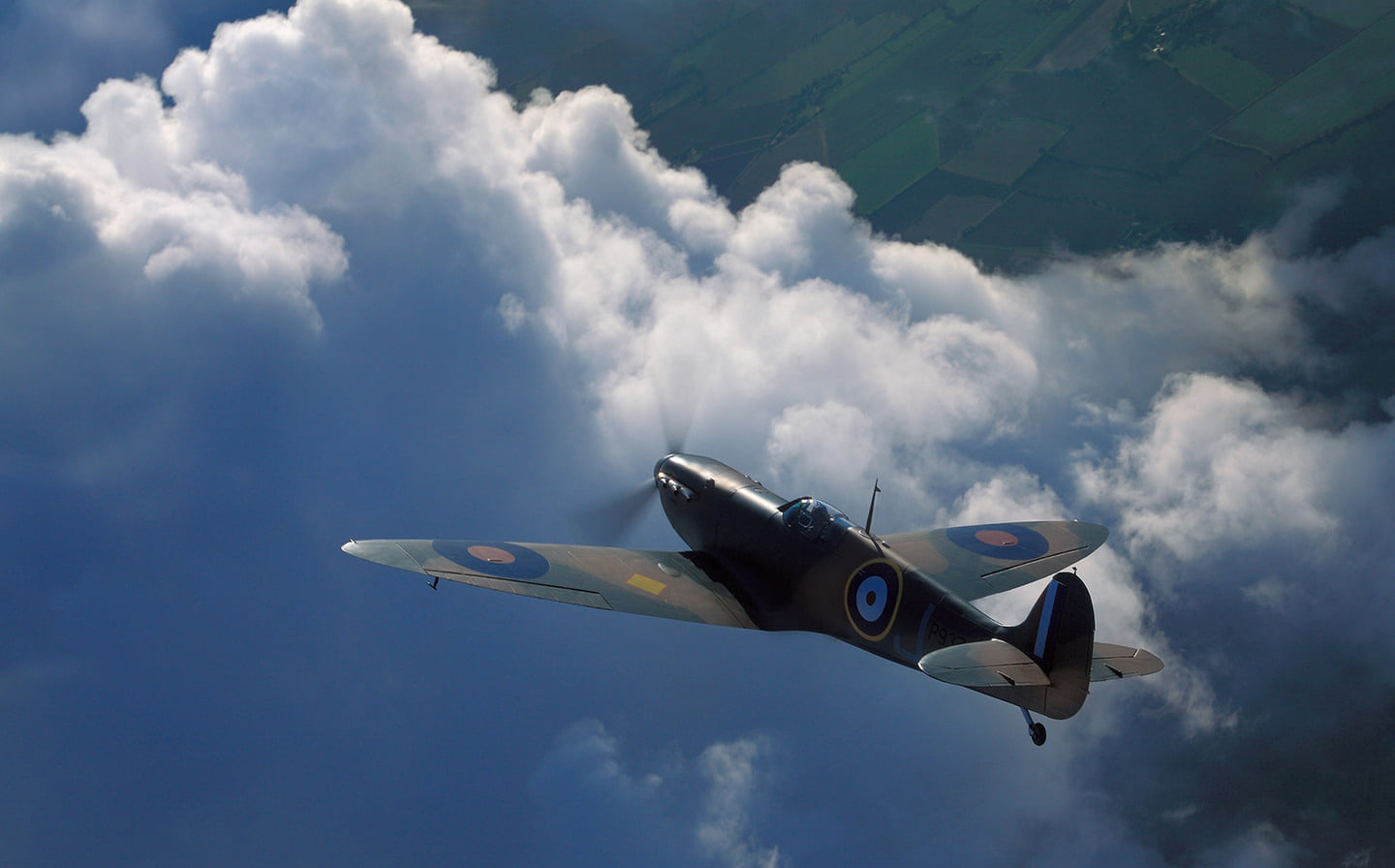 The tragedy of the brilliant Spitfire is that its creator did not live to see the greatness of his plane. Mitchell died in June 1937 from cancer, working every day until the end. Mitchell’s assistant picked up the baton and shepherded through this difficult time. During the Battle of France, the Hawker Hurricane did the most of the fighting, while Spitfire worked to increase production. At the beginning of the Battle of Britain the British were down to a little over 600 fighter planes, of which only 230 were Spitfires. They would face-off against the 2,500 Luftwaffe aircraft. In preventing the Luftwaffe invasion, this would be their finest hour.

In the roll up to World War II the British had a secret weapon that would soon change aviation. Frank Whittle, from the firm Power Jets had designed the first operational Turbo jet engine, a giant leap forward. Whittle reached out to Gloster Aircraft to partner with on developing the first jet aircraft. After meeting with Gloster’s chief designer George Carter, they formulated plans for a high-altitude bomber. The first product was the Gloster E-2839, which first flew on May 15, 1941. Pleased with the results, the RAF ordered 12 prototypes. They had intended to name this WWII British fighter plane the Lightning, but the Republic P-47 already had that name, so it was dubbed the Meteor. 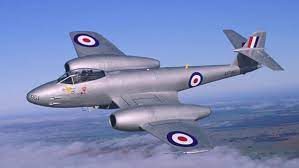 The Meteor in its final configuration took to the skies in 1943. During the testing phase, several different engines were used. Ultimately the Rolls Royce W2B engines were selected. There was a two-engine configuration with each producing 1700 lbs. of thrust. Armed with 4 cannons in the nose, had a ceiling of 34,000 feet, and jet along at over 400 mph. By now, the British were aware of the German jet, the ME-262. There was some anticipation of jet-on-jet battles, but the RAF decided to keep the Meteor homebased. Once the Allies landed on the continent in June 1944, the Meteors were moved to bases in Belgium, but the Allies prevented them from flying over German Skies.